The Steely Dan song "Any Major Dude Will Tell You" makes a reference to something known as a "squonk". The band has a habit of using unusual or made up words in their songs, so I did some investigating and found out that it is in fact a real word that describes a fake creature.

I like to imagine fans searching their local libraries when this song was released in 1974, desperately trying to understand what the band was talking about. Even the modern day (2020) Merriam-Webster online dictionary (which I imagine is more comprehensive than any back in the seventies) does not have an entry for squonk, so it is possible that certain people lived for decades without discovering the meaning behind the lyric "Have you ever seen a squonk's tears / Well look at mine".

"Whoever's is the soil, it is theirs all the way to Heaven and all the way to Hell": the notion that the land I own is not restricted to just the surface of the earth, but the sky above me and the ground below me.

The legality of this concept is problematic in modern times due to the sky becoming a habitable zone for humans. For example, a literal interpretation would find no issue with someone living next to an airport building an anti-aircraft battery on their property and taking shots at overhead planes in response to their "trespassing". For certain people, even the International Space Station might encroach on their property as it orbits overhead!

The geometry of this concept is also problematic if you believe the Earth to be round. For example, the "hell below" me in North America and the "hell below" my friend in Russia might intersect. Assuming the US Government does not get to it first, who owns the oil that resides in our intersecting hells? 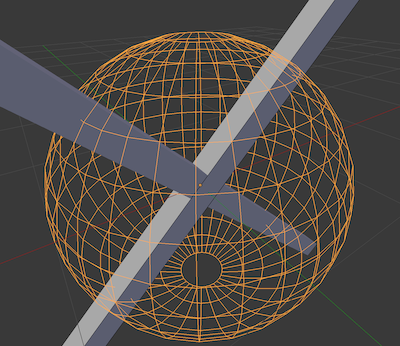 Pictured above is my property, extending infinitely above and below the surface, colliding with another person's property.